This exhibition is an installation of over 2,500 connect-the-dot puzzles on business reply mail postcards completed and returned by people in New York City and across the globe, along with an animation video that "connects" the postcards.

A year ago, Brown initially distributed these postcards by slipping 1/3 of them into magazines at newsstands in mass transit locations such as Grand Central Station, Port Authority Bus Terminal and Union Square; providing 1/3 of them to New York City public school teachers in the Bronx who incorporated them into art classes; and handing out 1/3 of them to colleagues in the art world, including prominent artists, gallerists and curators.

These postcards provide simple instructions to connect the dots and use the US postal system to give voice to participating individuals and groups. In addition to tourists to New York from around the world who found the postcards in magazines, the NYC/Bronx public school students and art-world colleagues of Brown and curator Chae, some of the participants came upon the postcards through Fluxface, a mail art blog/website located in Merignac, France; an art teacher in Hellerup, Denmark; the Federal Corrections Institution Elkton in Lisbon, Ohio; and the Green Gallery in Milwaukee, Wisconsin as well as Winkleman Gallery in New York.

Brown has created a stop-motion animation video by scanning in the returned postcards and editing to place similar responses in frames next to each other. The similar images pass the eye at a rate to “animate” the images and “connect” the individuals who created them with each other. The Dotto Lotto project playfully and seriously explores the possibilities for human connection through these elementary puzzle-game postcards. The video is approximately 6 minutes long and appears accompanied by a sound collage created by Brown. 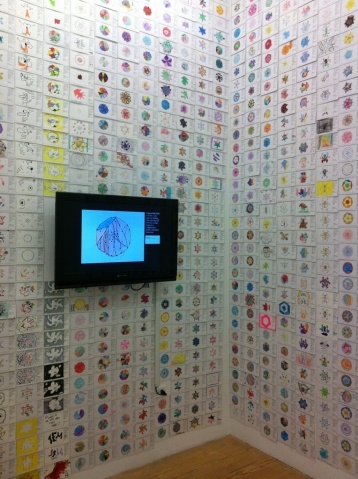