E.V. Day, Double Black Hole (Red and Black), 2009, fishnet bodysuit pigment embossing on cotton base sheet, 58.5 x 36 inches. Courtesy of Dieu Donne Paper Mill
Ctrl+P Curatorial Statement:
We wanted to present an exhibition that explores the rich possibilities of the print medium in original and unexpected ways and hence came up with a title that is in itself a new way of expressing the act of printing: Ctrl+P.

I saw this project as a great opportunity to foster a dialogue between terrific local artists working in print with non-local artists doing the same. Many of the artists in Ctrl+P challenge notions about our world by exploring different perspectives and visions of what is possible. Some do this by creating entire environments through installations. Rob Swainston, who often creates large-scale, literally landscape-altering installations with his prints, opted for a smaller, elegant transformation of the front entrance under the staircase with Slightly Unstuck. Esperanza Mayobre often references architecture in her work and, in her current installation, uses her own name (esperanza means “hope” in Spanish) and her own image in printed form along with religious imagery to convey how much hope for the possibility of a new world and faith is involved in the lives of undocumented immigrants in America. DC and Maryland artists Flick and Kachadourian also reference architecture in their installations and it is interesting to view the environments they create in the exhibition alongside the installations of Swainston and Mayobre. The title of Flick’s installation, The World Goin’ One Way, People Another, Yo,’ quotes a character from the acclaimed HBO series The Wire, and both the quote and the series refer to the co-existence of multiple structures, systems or “worlds.” At the same time, the title refers to what the elevator actually does—which is move people from one level (and scene) to another—and Flick has created an enclosed environment that literally “envelopes” the occupants in the pattern from inside security envelopes.

Other artists challenge notions about our world by showing us new ways of seeing what is familiar. Brian Chippendale and Jungil Hong create fantastical worlds of strange creatures and lands by creating collages of their silkscreen prints, yet often reflect or comment on what is happening today. On the other hand, Marie Lorenz shows us views of our surroundings we would probably never see—by building her own boats, navigating the waterways around New York City by currents and videotaping her journeys with cameras mounted at different perspectives, she provides us with rare glimpses of New York otherwise unavailable to us. As she discovers and “finds” an unfamiliar version of our world, she finds objects during her journeys and creates prints of them by using a method similar to rubbing and ink. Melissa Brown creates “portals” into other worlds with the large-scale prints in this exhibition and explores themes involving possibilities, chance and changing perspectives/values, among many others, as she does with her paintings and conceptual projects and installations. And Christopher Davison is another artist who creates scenes from strange and mesmerizing worlds in his prints and paintings. An exhibition with the works of these non-local artists contextualizes and illuminates the work of local artists Colbert, Flick, Kachadourian and Bernier, who all provide visions of their own worlds or create new ones for us to experience.

Not coincidentally, this exhibition reunites the works of four close friends who are important members of the highly influential Fort Thunder scene/phenomenon/movement in Providence RI of the mid-1990s. Brian Chippendale is one of the co-founders of Fort Thunder and he, Jungil Hong, Melissa Brown and Marie Lorenz, all studied Printmaking together at the Rhode Island School of Design. Fort Thunder was a former textile factory (now demolished) that served as a 24-hour work, live, studio and performance space for students in Providence exploring art, music and the idea of creating a community based on what the world could be. This spirit of building communities and transforming the world around them is also at the heart of the works of Leeman, Durrie, Lambert, Gibbon and Dihle.

I also explored through this project the way highly original artists shift between different media and printmaking. Ctrl+P allows us to see how artists established as painters, sculptors, video or conceptual artists “translate” their visual and theoretical concerns into print and in some cases, we have been able to include works in other media along with prints by an artist to demonstrate this “translation.” Among these artists are painter Vince Contarino and installation artist Esperanza Mayobre. Interestingly, some of these artists, such as Barbara Takenaga, Christopher Davison, Melissa Brown, Marie Lorenz and Kris Chatterson, are better known for work in other media even though they have extensive printmaking backgrounds. I was also aware of unique and original print editions made by highly-regarded conceptual artists not particularly known for their backgrounds in printmaking, such as Glenn Ligon, Paul Chan, E.V. Day, Byron Kim and Kelly Sherman, and wanted to share how these artists approached printmaking in a way that nicely reflect their conceptual theories and creative approaches to making and thinking about art.

For both myself and my co-curator Kristina Bilonick, it was a privilege to feature editions publishers and printing studios that make it possible for artists to make outstanding prints, and I’d like to acknowledge and thank Parkett Publishers (Paul Chan), Dieu Donné Paper Mill (Glenn Ligon, E.V. Day and Byron Kim), Center Street Studio (Kelly Sherman), Shark’s Ink (Barbara Takenaga) and AS220 Community Printshop of Providence RI (Melissa Brown). 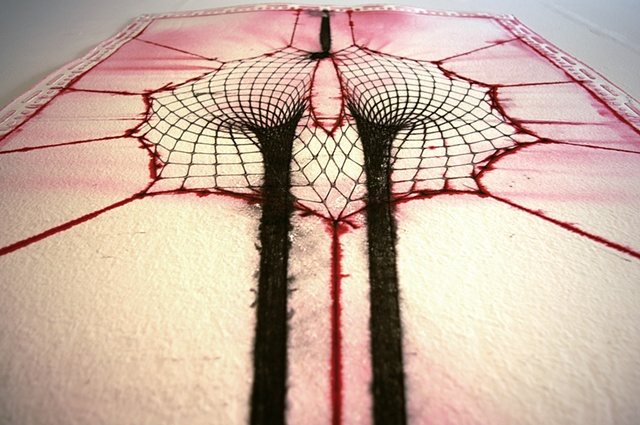